The Freshworks Command-Line Interface (CLI) enables you to build, test, and package apps that are published to the Marketplace.

To view the list of CLI commands, after you install the CLI, at the command prompt type fdk and press Enter. 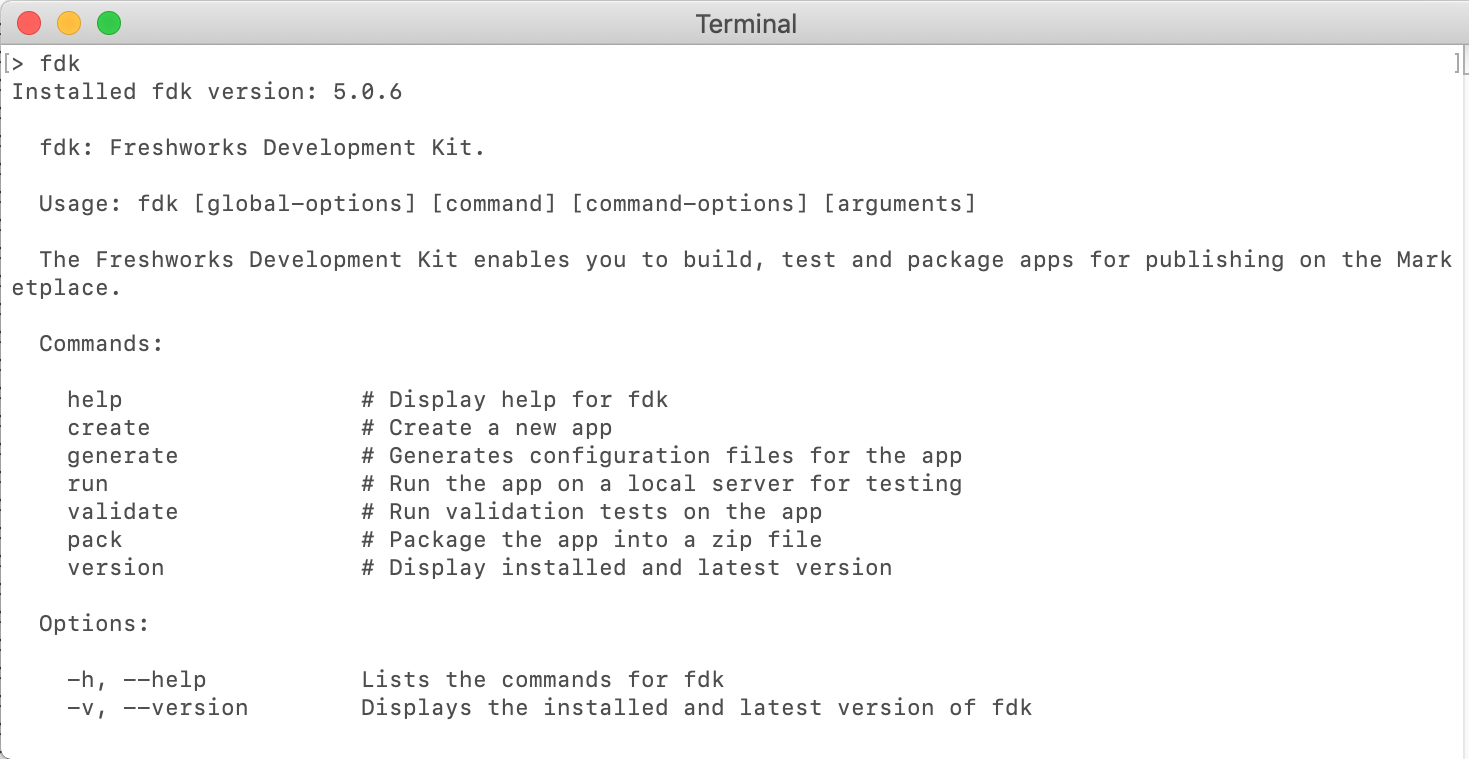 To view the information about a CLI command, run the following command.

To view the detailed logs that pertain to a CLI command, run the following command.

When you run the Freshworks CLI commands, if no version update check has run in the last 24 hours, the FDK:

To prevent the FDK from checking for version updates, you can use the --skip-update-check option, along with the CLI commands, as follows:

The command creates an app in the specified directory, based on the default app template. If no directory is specified, the app is created in the current directory.

Note: Ensure that the directory in which the app is to be created is empty.
$ fdk create [--app-dir DIR] [--products PRODUCT]

Sample Output
A Freshcaller app is created based on the your_first_app template, with the following files.

Output
The app files are created under the /Users/user/myfirstapp directory.

This command is used to generate app files with a specific template for an existing app that was created by using the create command.

The run command starts the local server, deploys the app project on the server, and enables you to test the app.

Note: When apps are submitted for the App Review process, ensure that in the coverage summary, the coverage of each component is at least 80%.

Example 2
To deploy the app project located in the myfirstapp directory, run the following command. $ fdk run --app-dir /Users/user/myfirstapp The output is the same as that for Example 1.

Note: Ensure to install or update to the latest FDK version.

This command validates whether the app code is error free. If there are errors in the code, corresponding violations are displayed after the command is run.

The latest FDK version requires Node.js 14 or later versions. If you run the fdk validate command to validate an app built using an earlier (major) Node.js version and if your current Node.js runtime environment is 14 or later, the FDK displays a warning message and a prompt asking whether you want to continue. If you continue with the validation, the FDK:

After a successful validation, ensure to retest the app by using the fdk run command. The retesting generates the coverage folder and the coverage summary that is required to pack your app for submission.

If there is a minor Node.js version mismatch between the version used to build the app and the current Node.js runtime version, the FDK automatically updates manifest.json > engines.node to reflect the Node.js version on which the app is validated.

Note: Before packing, ensure to validate the app; resolve all Node.js version mismatch issues, if any.

The pack command creates an app package file that can be submitted for the app review process.

The command displays the Node.js and FDK versions that are used when packing the app.

After you run the pack command, a dist/<app_directory>.zip file is generated. To submit the app and get it published to Marketplace, upload the generated file to the Freshcaller developer portal.

App packed successfully at /dist/<current_app_directory>.zip
Upload this file to the marketplace by following the instructions at https://developers.freshcaller.com/docs/freshworks-cli/

App packed successfully at /dist/myfirstapp.zip
Upload this file to the marketplace by following the instructions at https://developers.freshcaller.com/docs/freshworks-cli/

Enter your helpdesk URL to proceed to login

By clicking "Proceed", you agree to our Terms of Use.